Its been a while since the blog was updated. Much has happened in the interim.
Six months is a long period of time. The waning of the epidemic, local outbreaks, the fear of the havoc wreaked by the DELTA all kept us on our toes.

The lockdowns in some form or the other continued and as usual people adapted, moving on with their lives. Framing, dairy, goat rearing and trade all continued. The tomato crops brought in good money. Above all, the copious rains 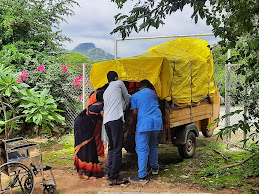 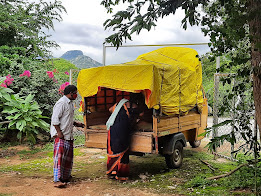 An old patient being loaded onto a make shift ambulance 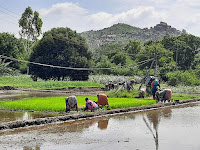 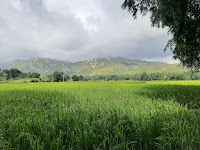 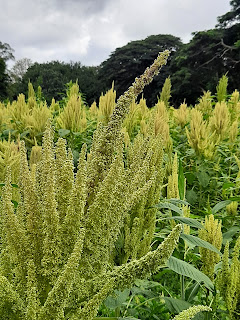 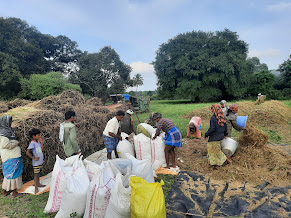 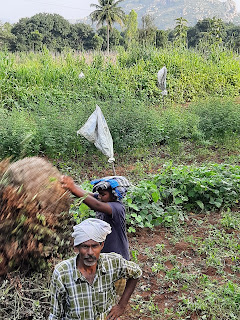 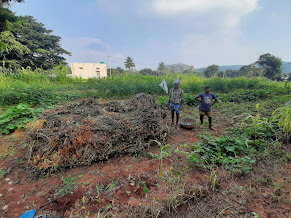 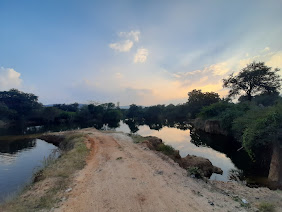 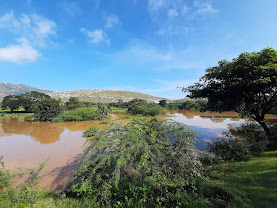 A LOVELY TIME FOR THE GOATS & CATTLE 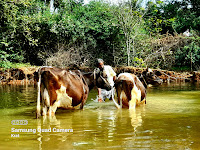 Here is wishing everyone a wonderful 2022
Posted by Rishi Valley Rural Health Centre at 7:07 PM No comments:

Learnings from an Epidemic: Looking back and "Forward"

This post is a collection of my personal thoughts on the COVID pandemic as it unfolded. In previous posts I have written about the impact on the people in our neighbourhood.
I am certain that much of what I have written below has been articulated at some time or the other by others.

The world had forgotten what Pandemics are and the havoc they cause. The 1918 flu pandemic has been largely forgotten, maybe a distant  memory in some. The Asian flu pandemics of the late 50s and 60s, lasted about a year causing between 1 - 4 million deaths worldwide. The lessons from these were consigned to dusty pages of Textbooks on Community Medicine. Most of us doctors, just read these answered questions in an exam and promptly forgot about it!

Ebola, SARS, Swine Flu all reared their heads but did not sweep the world. Advances in medicine, hygiene, vaccination etc. all probably ensured that these epidemics were controlled. There were possible Virologic factors too which limited the spread of the disease.

In Dec 2019, the first reports surfaced of a new Virus with high morbidity and mortality emerged from Wuhan in China. Just as the rising sun seeks out and illuminates all in its path,  the CORONA Virus spread through the world seeking out every nook and corner, affecting every part of the world. None were spared the Viruses reach, cutting through swathes of humanity. Panic and mayhem followed in its wake.

The medical community was scrambling to find answers being demanded by the administrators and people. In a sense, advances in hygiene, medicine, investigations, drugs and technology had kept COMMUNICABLE/INFECTIOUS DISEASE EPIDEMICS at bay. The epidemics of old were consigned to history and possibly only distilled lessons from these epidemics remained in text books.

The silent epidemic of NON COMMUNICABLE diseases was the talking point everywhere. Minor outbreaks  of Ebola, H1N1 etc. were quickly contained. Ebola with its high mortality, is scary but it never spread, though the threat of that remains. 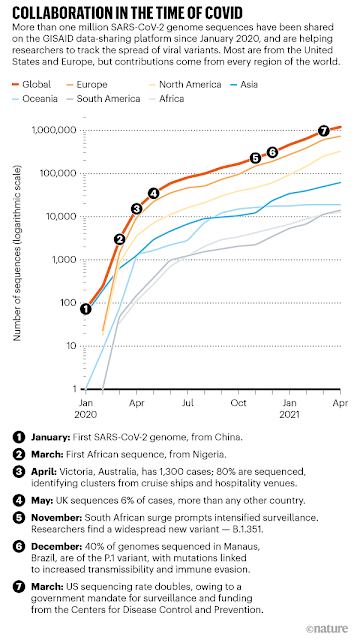 In India the Department of Biotechnology established INSACOG (Indian SARS-CoV-2 Consortium on Genomics (https://dbtindia.gov.in/insacog)
This consortium is able to quickly trace Mutations and helps track the disease spread.
VACCINES
Thanks to gene sequencing, Vaccines were quickly produced and tested.
GAVI - the alliance for Vaccines and Immunisation is a fine example of this collaboration.   https://www.gavi.org/
(Gavi, officially Gavi, the Vaccine Alliance (previously the GAVI Alliance, and before that the Global Alliance for Vaccines and Immunization) is a public–private global health partnership with the goal of increasing access to immunization in poor countries. )
If one looks at the speed with which the vaccines were developed, the chart below gives you an idea. In less than a year there were multiple vaccines available.
https://ourworldindata.org/vaccination 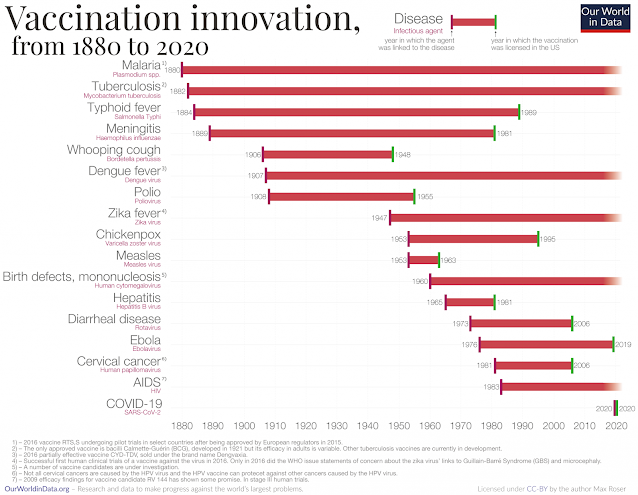 Another excellent resource on vaccination is: https://www.historyofvaccines.org/
SUPPORT and SHARING
I have always felt that "tech" has taken over our lives  - Ironically, as I write this on my laptop, the material is being saved in some cloud somewhere and people all over the world can access this piece.
For all the deriding of the WhatsApp University - this platform became invaluable during the pandemic. Widely used to mobilise support, exchange information on hospital beds, oxygen status etc. it proved invaluable in providing peer support to families struggling with COVID.
For doctors it was a platform where information and constantly evolving best practices were shared. This exchange of ideas and thoughts from all corners of the world was and continues to be invaluable.
Of course one had to be careful and separate the ludicrous from the ridiculous. Nuggets of great importance had to be searched for!
Anecdote:  I was approached for help in Delhi for a Rishi Valley Alumni. The doctor treating him was an AFMCite, a couple of years my senior. Through the AFMC network was able to trace him and speak to him. The patient pulled through, giving all some very anxious moments in between.
OPEN SOURCE DATA
Volunteer driven, crowd sourced effort to track the COVID outbreak in India - https://www.covid19india.org/
This website was a lifeline for us, working in the field. Up to date and informative, this became one of the most trusted data sources for us. Unfortunately the website shutdown on 31 Oct.
The other website https://www.worldometers.info/coronavirus/
Patterns and progressions of disease in every country in the world was mapped.
It was terrible seeing the number of people affected world wide. One could also the numbers exploding as the pandemic reached its peak in the affected parts of the world.
ARTICLES:
Dr MS Seshadri and Dr T Jacob John have been regularly publishing articles in the print media. For those interested all these are available online.
Dr Shankar Subramaniam from the Armed Forces has a number of very interesting publications, including one on Mathematical Modelling and another the largest study on Vaccine efficacy. All available online
THE FUTURE:
It is impossible to foresee the shape of the COVID 19 pandemic. Foresight is 6/60 and hindsight is 6/6 vision!!
However - I am giving it a shot
1. This pandemic will slowly move towards endemicity - with few local outbreaks
2. There will be other Viral pandemics in the years to come.
3. Human beings will necessarily have to change the way we live - in what way I do not know, but the lockdowns have given us an inkling of shape of life to come.
4. We will all need to care for the environment in a much more holistic way. At present humanity is at odds with itself and with the environment.
4. However, human ingenuity will continue to seek answers and am sure that humanity will find a way to live at peace with itself and the environment.
STAY SAFE AND HEALTHY
Kartik

Dr G Ramesh Babu, joined the RHC in Jan 2008. He turned 65 in April and decided to "hang up" his stethoscope. A paediatrician by training, he took care of all types of patients.

Ramesh with his energy, zeal and commitment to patient care was a real asset to the RHC. Very good with children, he took excellent care of them. He was always available for any emergency or consult anytime of the day or night.
The RHC will miss his presence.
Some photos from his farewell 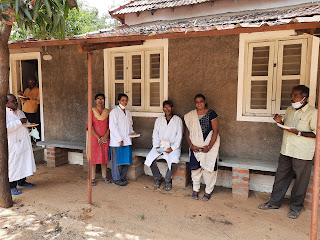 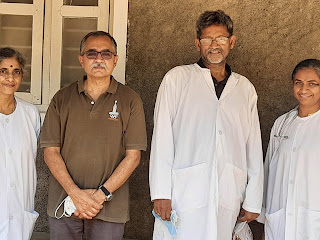 Posted by Rishi Valley Rural Health Centre at 9:26 AM No comments: